This type of music tends to challenge the distinction that is made in conventional musical practices between musical and non-musical sound.

RUBBISH - New Normal Same Old Nonsense
This is my contribution it has some of this and some of that dog barking feed back metal chains marbles some cut up. Noise.
Side B is all live sets


INTERZONA - Blast !!!
Harsh pedal noise.
Definitely some hardcore harsh noise blasting going on here.
This is South American...Brazilian?
There's some pan effects happening.
A bit of some what seems like it could be rhythmic harshness or its backwards...
This is rather entertaining
A good harsh noise tape.

Side A Dead pet sinkhole
Sounds to be recorded live.
Could just be mixing and good use of reverb and delay.
Dark rhythmic harsh drone creepiness.
Like drifting through a dead ravaged space ship with floating bits of frozen corpses and hunks of radioactive slag.
Enjoyed.

Side B
Numerous attempts made to retrieve the gaussed AI data core.

Good use of sourced sounds.
Reccomended.
Can't wait for you to meet your self.
we've become a race of peeping toms
Top

Bricks - opposite of icarus
This is really good and sounds young.
The musical elements are used to good effect. I can't really tell you what this tape is about except for the track thats obviously about suicide because the lyrics printed on the insert are fucking microscopic. That's my only complaint. The printing on the tape shell is good. They took advantage of the space and I like that.
Over all this is fun angry upset sounding stuff and I recommend it.

Vasectomy Party - sterile daggers
This reminds of before cell phones.
Harsh noise sourced from old phone sounds and old computer programs on tape and run through a lot of pedals...
I think.
I enjoyed listening to this tape.
I really like the packaging.
The printed paper inside the tape is classy as fuck.

This guy is all over the place sound wise.
Check out his reviews and new purchases.
He also does music and experimentalism.

The cover art has the "personal" touch.
I like it!

The HNW audio on this tape superior to the hand drawn graphics(printed on nice paper). Loud. Harsh Noise Wall.
Came with a sticker

Side 1 Bipolar is a more crunchy type HNW
Side 2 Batman is more of a harsh drone type wall.

Hard to choose what side I prefer but side 2 Batman seems to be doing it.

I hope this is the right place for this…

Just finished listening to the RDCD/(A)Sex split CD for the first time in years, and yeah, the RDCD half is about as brutal as I remembered. The suite of "Dimensions" tracks may be the most astringent and violent power electronics I've ever heard, absolutely inhuman vocal sounds pushed into the red and some incredibly painful feedback and resonance manipulation plus some gnarly metallic sounds, maybe sheet metal given the twang; my closest point of reference might be Controlled Bleeding at their nastiest, or perhaps some real vicious Japanese harsh stuff—Thirdorgan and Masonna especially. The (A)Sex piece is very dynamic and much more contemplative and atmospheric while still being quite punishing, and while so far as I can tell an "instrumental" harsh noise track driven mostly by delay manipulation kind of has the feel of an early power electronics cut, which is an interesting reversal. Despite the crispness of the noise the shifts feel like clouds passing over one another, over the moon. Exquisite stuff.
Top 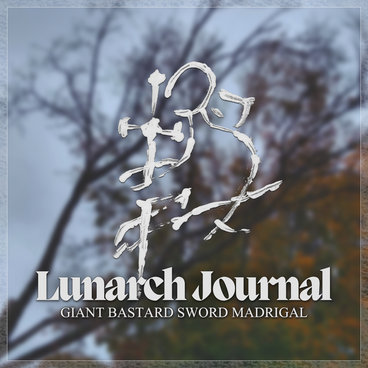 Lunarch Journal is a collection of aural journal entries created over November and December of 2019. Also included is "In Summer", a four-part drone piece that attempts to crystallize summer depression in sound.

I only just found out about this release today, but it's highly enjoyable. Most tracks are for a given day in November, averaging a minute each. Most feature scrambling blasts of noise and demonic screaming, sometimes mixed in with bursts of mechanical percussion (Im Innersten Eschaton makes me think of HEALTH's Death Magic in this regard), and even breaking down into beautiful organ and singing melodies (though keeping the screams writhing underneath). Overall, this sounds like the soundtrack for a cathedral burning down into cinders. I enjoyed this thoroughly.

I was just listening to this yesterday myself! :3 Fantastic, scathing, beautiful record.
Top

head of goliath - consume all the nations 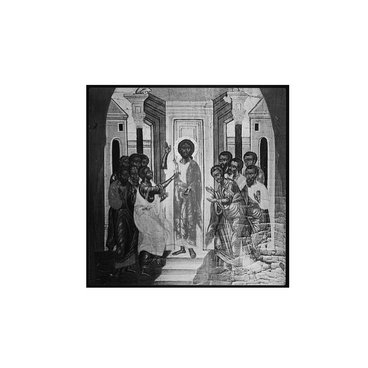 This is the latest from noise project head of goliath. Like the previous two albums, diadem of stars and prepare ye the way of the lord, consume all the nations offers tracks of repetitive, often heavily looped noise. Don't take that to mean that the audio is boring. It isn't. Rather, head of goliath's sounds are rich, occasionally including some subtle timbral changes or having an extra, free-flowing layer of noise over the top. They are satisfying to listen to and don't overstay their welcome. But unlike the previous albums, consume all the nations has notably higher fidelity, resulting in a richer sound without sacrificing any bit of grittiness.

While this project is inspired by Christianity, consume all the nations is deliberately apocalyptic in theme. Each track title is a Bible verse, all seemingly pointing towards the hubris, corruption, and final judgment of man. The album flows similarly, starting with a steady heavy arpeggio that's sprinkled with white noise hisses. This opener is followed with gradually noisier pieces, largely alternating between segments of high frequency static (maybe deliberately reminiscent of locust wings, as in the track daniel 7 9) and undulating bassy chugging. The penultimate track, joshua 5 15, features a prominent and thick sonic rhythm that should rattle your windows before cutting into the final track, judges 14 14, which blasts mechanical sounds off before being abducted in a synthetic squelch, vanishing into a tranquil drone.

Given that the sounds are repetitive, they function more like textures than they do conventional music or even many other types of noise. Together with each being named after a verse, it suggests that each track is a freeze-frame of what happened at each point of the books they they are derived from. I can't say whether or not this is deliberate, but it really strengthens the impact of this album.

Overall, I really enjoyed this.