How did you end up making/listening to noise?

This type of music tends to challenge the distinction that is made in conventional musical practices between musical and non-musical sound.
Post Reply
63 posts

My path to "noise" was through my interest in "industrial", "grindcore" and fringe electronics based material. I had been hammering at that nail a while when I became friends with John Zorn's older brother (we were co-workers in a barcode scanner factory around the turn of the century) and he dumped gobs of interesting shit my way. Lots of Tzadik, including Merzbow's 1930, which I found delightful, cementing in a wider than previously assumed community/interest in such things. I remained highly reclusive, however.

Fast forward a couple/few years and I had relocated to PDX and someone at a house show/BBQ my roommates were throwing mentioned the "ilovenoise" incarnation of the troniks/chondritic forum when we were discussing "music", from which point the socializing aspect formed up and now I'm here.

Is HNW the new MISC?

http://www.rochambeau.net/ <--- this is a dead URL until I recreate the site and resolve my host; R.I.P. Rhubarb!

DEADER GAYER ONLINE wrote: ↑
Tue Jan 14, 2020 6:02 pm
When I was a kid I had a few tape players and used to constantly mess with them and tapes from staying up all night to record music from radio stations. I was obsessed with trying to slow the stuff down and re record it onto other tapes to make what I called “ghost tapes”

At one time, I had little more than a pink boombox for private entertainment. It looked very similar to this, IIRC: 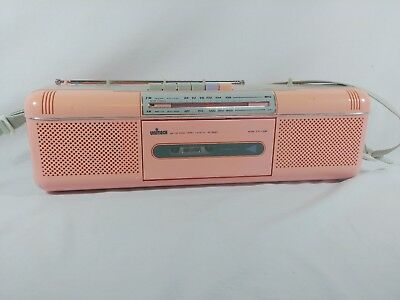 This was when my sisters and I lived with my dad for a year while I was in 5th grade. This was the time in my life where I would go out to the backyard after school almost daily to smash concrete with a huge, rusty metal rod for "fun". Sometimes, I would also dig holes and pick through refuse in the hollowed out basement floor of the demolished building that used to stand where my dad's trailer was parked. I was always told, but never sure if I should believe, that it used to be the site of a violent biker bar called "The Bloody Bucket". This was according to my dad, so it's probably bullshit. But I digress.

Outside of smashing concrete and busting open rusty old cans of green beans and blue paint I found in the backyard, or watching "At the Auction" via satellite in the living room, I listened to a lot of Streewise street team promotional cassettes my sister would get hundreds of in the mail. They were mostly numetal poop. I still regret taping over/destroying so many of them over the years, though. My sister even burned an entire box (or more!) of Mindless Self Indulgence promos in our burn pile (playing with fire and burning shit on trash burning days was also a big event for me). No idea what prompted her to do that. Anyway, it's unfortunate, since there's a market for a lot of those tapes now... Fucking Smashing Pumpkins cassingles going for $20 a pop is ridiculous. But I digress again.

My old pink boombox sometimes did weird things, like playing tapes too slowly, or even backwards (I'm certain his was a wiring/head alignment issue. It only happened a few times). Very exciting stuff. By the 7th-8th grade, I'd started recording mix tapes and bedroom stuff, most of it on the aforementioned promo cassettes. I got a better boombox first, though. What had started as earnest attempts to make music with no musical experience gradually turned into jokey AxCx-inspired bullshit by the time I'd reached the 9th grade. The "let's start a band" idea came up a few times in high school. I tried to make Fruity Loops IDM and "noisy rock music" for a while. It never worked out. Finally, when I came to "understand" and feel receptive to "noise music", I quit trying. I recognized my limitations and realized embracing them made more sense than deluding myself that I was a musician, or had any standing in a traditional musical environment.

The first time I happened to stumble across noise music, I thought it was pretentious horseshit (a lot of it is). I wasn't receptive to the idea whatsoever. Gradually, it became my own personal punk rock-style eureka moment, specifically with Premature Ejaculation, and being further-exposed to the increasingly abstract material of gateway groups like TG and SPK by way of their later, more accessible music. Before that, I only made "noisy music", never "noise". All the things I thought I couldn't possibly get away with before were suddenly acceptable. I sometimes look back and think I wasted a lot of time and missed a lot of opportunities not coming to this conclusion sooner.

So, I really make noise because I can't do anything else. Sometimes I feel bad about it. But most of the time, I just try to find a form of Expressionistic fulfillment or Zen realization in the process. Beyond that, it's all window dressing.

i have always made noise, those racist warner bros cartoons got me started, i liked all the wacky sound effects and would mimic them

i started making noise recordings around '87, there was a store in town called 'locals only' that sold local music, so i made some cassettes and took them in, sold like three in three years!

for equipment i started with some answering machine mics and a realistic stereo reverb(goodwill), noisy as fuck, then came a PSS480, picked up a fostex x15 at the pawn shop for recording and later added a PDS2020 delay

later i got a korg polysix and a quadraphonic r/r, a bunch more that i have forgotten

the xray was a special moment in time, it was like a crazy basement party happening right downtown, place was open 24/7 and something wacky was always happening, one of the regular acts was smegma, which was basically organized chaos

the xray morphed over time to become voodoo doughnut, not really cool at all

anyway, i stopped making noise for a while in '95 when i learned to blow glass, started up again while living in the middle of nowhere to alleviate boredom, that was around 06, currently all my stuff is in storage so i am just a listener

cultofthesunmachine wrote: ↑
Tue Jan 14, 2020 11:47 pm
i started making noise recordings around '87, there was a store in town called 'locals only' that sold local music, so i made some cassettes and took them in, sold like three in three years!

These users thanked the author RUBBISH for the post:
cultofthesunmachine (Wed Jan 15, 2020 12:32 am)

cultofthesunmachine wrote: ↑
Tue Jan 14, 2020 11:47 pm
i started making noise recordings around '87, there was a store in town called 'locals only' that sold local music, so i made some cassettes and took them in, sold like three in three years!

yep, ANL was my 'serious' project, i made seven tapes i think, but unfortunately i recorded over the masters of the first two, didnt mean to, just drunk, so that project lasted from roughly 87 to 93, thats when i went homeless for a while

i made other tapes, one offs for trading with some local kids i met at shows, those were mostly noise, wanking, i would just play nimb shit for 90mins, terrible, sometimes i left the tapes at the local pizza place or laundromat

never played public shows, i shared an art studio in the pearl so sometimes people came over and listened to my wanking, had a couple parties that i dont really remember, had a sound piece in a little gallery i forget the name, gone now

and come to think of it, i guess i started recording noise earlier, like 83 when i got my C64 and started making horrible digital noise, that thing was the shit, still have it!

A friend who at the time went by SICKGRRL (now DOGCATCHER, last I heard) used to release noise on bandcamp, and at first I had no idea what it was supposed to be, then she invited me to a show she did in town, and it had visuals and shit, and I fell in love instantly. Around a year later, I released my first noise album where I went on Audacity, generated some white noise, and used different FX to fuck with the sounds, that was before I got my own mixer + patch cables to try No-Input mixing with.

I caught my Dad's affection for AC/DC in middle school and it all spiraled downhill from there.

But in all seriousness, I learned about noise through my growing interest in music history. Spend your time getting deep into rock and metal history and you inevitably start hearing about noise. After more experience with punk rock and my friends having bands, I got the music making bug myself. But I sucked shit, so I downloaded Bandlab, gave myself a dumb alias (with matching modified racing helmet and Mysterio-esque cape) because early high school me genuinely thought anyone would care enough to stalk me online, and just fucked about. I didn't really take noise seriously at first (I was a total diehard metal kid up until 10th grade), but as time went on I totally fell in love with it as a genre. Getting into Sunn O))) helped, and they definitely played a role in my growing love for droning and guitar-based destruction. Essentially, I went from making noise because I couldn't make anything else to making noise because I actually enjoyed the hypnotic, otherworldly, and brutal qualities of it.

Even if you took a few years and learned all the chords you’d still have a limited number of options. If you ignore the chords your options are infinite and you can master guitar playing in one day. - David Fair
Top

You're just pissed at music because it doesn't love you back!
-- The guitarist of my former band.
Top

Yeah well tell that goof to unlearn guitar.?
What have they done that hasnt been done before or that hasn't been done over and over everyday for the last 50 years.
Musicians that cant appreciate NOISE are cunts and I don't like them.